My Gosh, where to begin?
I know I always say this, and it has almost become cliche from me, but when you are inundated with good music, it's always hard to choose. So, here are my recent pieces of ear candy I'd like to share with you from the Creative Commons fold of music.

Strange Republik - Reactor
It's always great to hear an artist improve their sound. I've been a fan of SRs for about a year now, and he's put out tight tracks, so don't get me wrong and think this is a dig at his product.
This offering has the general Strange Republik sound with a more mature feeling to it. When I received the message from SR that he'd put out a new EP, I jumped at the chance to listen to it. He still has that vinyl pop and sweet repetition going on with a nice grip on the loops and samples he's offering.
I can only compare it this way: I can't remember the article reviewing Portisthead's "Third" album, but it essentially said that if Portishead had been dropping albums in the space of time when they went into hiatus, then it would sound actually like album five or six, not their third outing.
"Reactor", sound and progression wise, album number four.
I know I may not have written much of consequence on this album, but it's just one you have to listen to. I even invite you to listen to the other three!
There are just some things you cannot explain why you like them outside of the term "comfort." Things such as a blanket from childhood, a favorite t-shirt, a cola which you have an unhealthy addiction to; for me the same can be said of Strange Republik's latest.
It's all about comfort.
Sinter - Crust - Heavy Mental netlabel 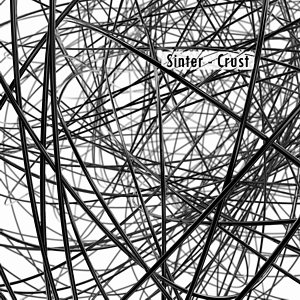 Oh, boy... bass heavy emotion mixed with conflicted lyrics. Or lyrics which aren't conflicted that take on a whole new meaning while listening to the movement of the music?
There's longing, life assesment, and calls for help. Sinter takes the words, spoken or sung, and weaves a web of angst and reflection that you can move to. This dubstep gem is one I found while searching the interwebs for new music to add to one of my podcasts coming in April.
"What Makes us Human" and "Stay Here" could be two pieces to the same puzzle - one at the beginning and one which finishes it. "Stay Here"'s longing and emotion on top of bone breaking (I may have stolen that from @solipsisitic, so bear that in mind) bass tears at your soul while you find your body moving to the music. "What Makes us Human" is the long life assessment we do in those moments of pondering that leads us to closure.
"Tightly Closed" almost made it on the podcast, but don't let that stop you from moving to both the lyrics and the beat.
Then you have the instrumental bangers "Template-Words Compilation" and the atmospheric sounds of "Pusher" which leads you into the chillstep track "56413_39".

Jolea - Ghostly Figures - Audiobaum netlabel
House, electro, chill, glitch and emotion (if you haven't figured it out by now, this is a theme to the night).
I'm not quite sure how I came across this netlabel, but I think it was a link shared by @netlabellovers and their tireless quest to retweet anything #netlabel.
The song which hooked me onto Jolea's EP was "Love Ruins All." I know I said this about Autorotation, but this is a song which also reminds me of both the vocal stylings of Sarah Fimm* and the backing music from Frost's Per with some nice techno and trance flavors mixed in (and some others I'm sure)**. The glitchy sounds, the slow build up to the soft explosion of sound was captivating.
This is just one taste of how the whole album is. It's a dance between down and midtempo beats with electro sensibilities adding to the mood of the album. Five songs, five pieces of earcandy, one great find!
Crookram - Through Windows - Budabeats

Budabeats FTW again!
If you're fans of the Deadbeats, Negghead, Just Plain Ant, Oh.Bliv, airnino, et. al, you've got to download this album.
Part of it sounds like the 70s met up with 80s turntables and had a lovechild late in their years just this year. Funky beats and melodies mixed with old school spirit (the bassline on Breakadawn will OWN you!).
Then as you progress through the album, you're taken further back into the sixties to film scores over sanguine, chilled out beats. I was first introduced to Crookram's style when he did a remix for Ez a Divat's on their "Nofun Nofun" release.
And, why yes, this album will OWN you!

Battery Collection - future ruins
I'd like to thank @madebyrobot for this piece of ear candy. Analog Synths and live drumming!
What more could you want?
This album reminds me of Add N to (X), but without the dark moods which accompany their music.
It is a fun, upbeat release that keeps you buzzing through your day.
Ooooo! Good imagery. If you were to do a documentary on a beehive and needed music to be the soundtrack to that voyage into the honeycomb, I could see this being what you'd want to have backing it up.
The synths just hum along with the drumming keeping that steady pace which you'd want when you're dealing with a bunch of bees.
It's another keeper.
tmsgksk - -451 F EP - anansi netlabel

Sounds which range from acoustic, jazzy, to broken beat production, this little find is one which you'll relish! @anansijp recently started following me, so I did my own little curious thing and checked them out to see that they were legit and not some internet business guru trying to spam my timeline with needless tweets about how I can become a millionaire within 5 days if I repost their garbage.
I'm glad I took that step and found a treasure trove of keen gems. tmsgksk (*how do you even pronounce that?) has put out a sincere piece of work which will help you chill until you're in a coma.
No, seriously, it's that good!
It's been a contender for listening time ever since I downloaded it.
*Update 10 April 2010 - @anansijp and tmsgksk have helped me out with this: you spell it out: t-m-s-g-k-s-k. Thanks so much for your help!!

My Bubba and Mi - How It's Done in Italy - Beep! Beep! Back up the Truck netlabel
I'm running out of staying power right now, so don't let my lack of steam keep you from checking their music out.
These three ladies from Denmark, Sweden and Iceland have dropped one HECKUVA gem in this album.
It is acoustic... OLD SCHOOL acoustic. They've created a sound which is ageless!
This reminds me of the old recordings from the 20s and the 30s (the few I've heard) where it's just one microphone and everyone around it plays just well enough to make sure its heard. The melodies are reminiscent of that time long ago past. Their vocal harmonies just melt in your ears and to boot, they've released their album on vinyl in which they've handmade the covers as @backupthetruck informed me.
I enjoy the lyrics as well.
My one beef about this album: The opening track isn't long enough!
And that's more of a selfish inclination than anything else.
* Sarah Fimm seems to fit better here
** It was an addition which needed to be made
Posted by UBLF at 10:34 PM